Yeah, Whatever. What He Said

I slept about two hours last night, and my scrambled mess of a brain is incapable of putting together coherent thoughts. Thankfully, Ian Mendes put it succinctly enough on his blog and in an interview on the Team this morning.

My name is Ian and I'm an idiot.

In this very web space after Game 1, I insisted it didn't matter that Ottawa lost in heartbreaking fashion. I was even naive enough to suggest the defeat would build character.

Then after they lost Game 2, I proposed that Bryan Murray reunite Alfredsson with Spezza and Heatley.

That didn't work either.

So that now brings us to the wee early morning hours here on Thursday after a dramatic overtime win by the Sabres here in Buffalo. I'm thinking of writing that Bryan Murray has to use Dominik Hasek for Game 4. But really, what's the point?

Goaltending has nothing to do with why the Sens are down 3-0. Emery's let out some ghastly rebounds that Miller hasn't, but you're right there's no point in bringing Hasek back into the picture. Hell, if there's any justice the Sens defense corps (and most of the forwards) should write a formal apology to Emery for their appalling coverage.

The Senators, unlike the Oilers, have no ability to play with desperation or passion.

What I find baffling, is that the critique of this team in the past was how they looked like deer in headlights in big games under Jacques Martin.

All of that was supposed to change when Bryan Murray came on board. Yet, it appears there is something else wrong with this team.

I don't think two coaches, who are polar opposites in personalities and style, could be making the same mistake in failing to push the right button with these guys.

At least Murray is playing Spezza, so I wouldn't completely absolve Martin's puzzling decisions, but simply firing the coach hasn't changed the story. They looked like chickens with their heads cut off in the first forty. Lots has changed but the stink of defeat still hangs over this club.

On the radio Mendes recounted, in anguishing detail, the parallels of Game 3 in the 2001 sweep. You'll recall, I'm sure, how the Sens were down 2-0 and languishing before Hossa and Alfredsson tied it up late. You just knew - as I knew last night - that they weren't going to win that game, nor did they deserve to win that game.

There are only three players on the team who have been present in every playoff nightmare (see below), so I'm not planning on taking a 'blow it up' attitude after tonight's game. But Peyton Alfredsson is going to wear this one like it or not. 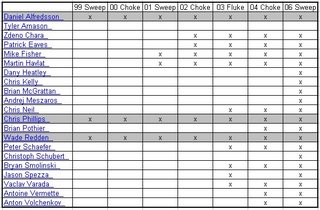 UPDATE: Forget to mention the point about their record in one goal games. That's been a problem all season and it's come back to haunt them.