Today's winning team, Columbus, hasn't faced Ottawa since November 26, 2009, the first meeting between the teams after the Vermette for trade-day injured Pascal Leclaire + pick (Lehner) trade. Ottawa won that game, but Leclaire wasn't tending goal. He was tending a broken face (not that it made him any goofier looking) after getting hit with a puck... on the bench....

Things are different this year!

Ottawa is sucking hard at SBP, is out of the playoffs and Pascal Leclaire is injured. Ok... maybe things haven't changed all that much.

Gonchar or Kuba may be watching from the stands. If it's Kuba in the press box, Sens have a chance. If it's Gonchar, Elliotte Friedman thinks that'd be a bad move (see 12 - see also point 30 for a terribly unfortunate linkage between Ottawa & Toronto). 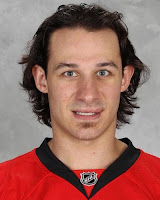 Jim O'Brien (C) was brought up today to help out at centre. Sporting 12 goals, 13 assists in 33 games and 200 lbs on a 6-2 frame, plus a set of radar-ears, perhaps he'll be one of those sleeper prospects and give us a little blind hope.


No one gives a shit about this game. It's all about the BoO tomorrow night. Because that's the only thing that can really matter this season.
Posted by THM at 9:49 a.m.