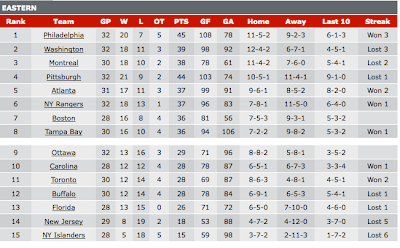 I started to write a story yesterday about the Leafs remaining games up to January and how important they are if the Leafs hope to get close to 8th position before the new year but I got sidetracked. Damn job...

Anyway, one game down in this important string of contests, and Leaf fans have to be happy Toronto got that first one out of the way against Edmonton. They looked good doing it too, but the Oilers have made a lot of teams look good this year so lets not get too excited right?

As you can see above, the Leafs are now 1 point away from 9th position with two games in hand on that other Ontario team. The biggest obstacle now, besides some of the tough teams Toronto still have to beat before NYE, is of course Carolina who have two games in hand on Toronto and then any other team around us capable of going on a run. Which is all of them.

Still, Toronto went into this week needing to win two of three against the Canadian West and that number has turned into one win in their next two. One foot in front of the other and all that. If the Leafs can somehow get within 3-5 points of 8th place in the next few weeks, I think we can all look to the rest of the season with some hope. If the team struggles the hope of playoffs could be gone before the calendar flips.

KADRI: Taylor Hall stole the show last night if you're keeping track of the rookie content, but Kadri was close again on a few occasions. That goose egg will break at some point and the kid might have 15 goals in him after that we could hope, but he's not going to win the Calder this season and as long as he gets better as the season goes on Toronto fans should be happy.

ARMSTRONG: I was glad to hear Phaneuf in his post-game comments give props to Armstrong for screening Khabibulin on the captain's blast from the point. I've lost track now, but the Leafs record is excellent with Armstrong in the line-up as opposed to when he hasn't. The little things he does, every shift, are the things that I hope fans start to appreciate more. We've needed a guy like this for a long time it seems. I'd like to see more Armstrong love out there.

GIGUERE: If he had gotten the shutout he would have been a star of the game. Instead he just stopped two Hall breakaways and everything else after the Eberle goal (what a set of hands), and continues to prove that Vesa Toskala should be on my Men's league team. As the back-up.

MACARTHUR: This is what the Leafs probably wanted from Lee Stempniak game in and game out. Burke will have a tough decision come end of this season because so far MacArthur has earned that arbitration awarded salary he didn't get this summer from Atlanta. Can the Leafs afford him? Can they afford not to sign him?
Posted by The Muppet at 3:44 p.m.