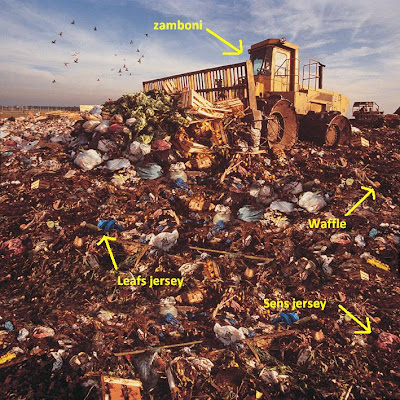 Garbage. No other word describes what we're seeing on the ice at ScotiaBank Place or the ACC of late. Except waffles. That is a literal description of what we see on the ice at the ACC. You know that scene in Slumdog Millionaire where the kids are picking through the garbage to find recyclables to sell for cash to buy food while sometimes identifying a piece of clothing they'd like to keep and wear? If they were to film that today, you'd see some kid picking out a blue and white '81' sweater or a red, white and black '55' sweater, curl up his or her nose and toss the jersey underneath the shitters that the actor blew his innards from.

Grabyourcrotchski and Undrarkid Karlsson are the only bright lights on either team. The next BoO on January 1, 2011 should feature a flat out one-on-one between these two kids (1-on-1 on 1-1-11! Great TV promotion there!). Put a Sundin bobble head tomato can on the ice at either end of the rink and tally the number of times each hits said can with the puck. Highest total wins.

(Sorry I haven't been around much late, folks. I scored a promotion at work and have little time to post or even read much other than a whole lot of court cases whilst learning the ropes).