Special nights for Leaf fans have come seldom over the past 40+ years. The odd playoff round clincher here, glimmer of hope there, a win to stop us from fully bleeding out.

It's a franchise that has not won anything significant in a long time. And for that reason, tonight's honoring of Mats Sundin is even more important.

On many nights during his 13 years as a Leaf, Mats Sundin was the only thing fans had to cheer about. You could always count on him to do something special. To score a goal when the team needed one. To make a pass with the clock ticking down. To represent the emblem on his shirt and the C over his heart with dignity.

In the past week a lot of media and bloggers have jumped on the greatest  memory wagon to carry them to this Saturday night. I'm going to do the same.

Flames @ Leafs, October 14, 2006. My best friend and I, in the 4th row, right behind Kipper, the game tied. Most know what happened next. But for those who don't recall, Mats Sundin scored his 500th NHL goal. In overtime. The game winner. A hat trick.

Man, did I tell that story to anyone who would listen for the next week.

Whether the highest scoring Swedish player of all-time will one day become a Hall of Fame member, we've had this discussion a million times here at BoO. Personally, I think he will. But for tonight, it's not about the HOF, or whether he's a better captain and player than Daniel Alfredsson, which is where this conversation usually travels on this blog.

It's about the Leafs giving honor to a player who absolutely, without a shred of doubt,  has earned it. 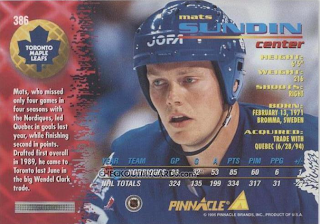