Just over 3/4 of the season is over and tonight the teams of the BoO have begun the last 1/4 of their respective regular seasons.  Each is playing their first game after the trade dealine that saw very little action on the actual day.

In Toronto, the 4th member of Hanson, Ashton Kutcher Carter is Mmm Boppin' on the bench somewhere in Toronto (is he a Marlie or a Leaf?) while "the next Pronger" Keith Aulie is happy he has squinty eyes -  Sooo much sun in Tampa.  Maybe he's made the trip to a Ft. Lauderdale bar to watch the Leafs battle from being down 2-0.  2 goals on 2 shots to open the game.   Good work, Mr. Allaire.

Ottawa is currently up 1-0 on Boston, despite Sportsnet starting out the broadcast with a 1-0 scoring for the Bruins. Ottawa's new acquisition, Matt Gilroy, is playing alongside Chris Phillips. New goaltender Ben Bishop has reported to Bingo where he'll right that ship before getting a shot with Ottawa next week (per Murray & Murray).  So far, tough guy Corvo hasn't gone after 38lb lighter Kyle Turris despite threats to do so.

Enjoy the rest of the games, folks.  Sens fans are wondering if Ottawa can beat Boston after losing 8 in a row.  The trending answer (courtesy of self-promoting THM on @StraightFromTHM) 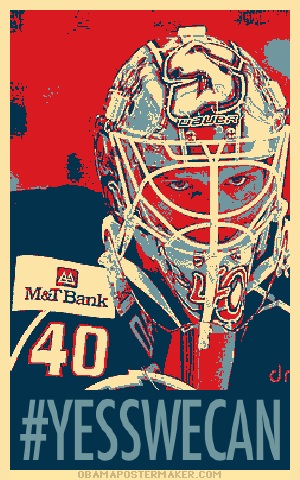