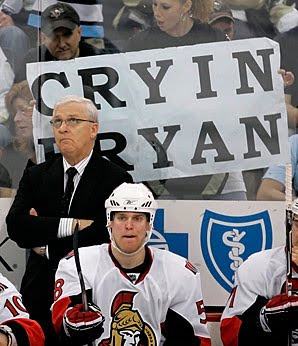 The man who brought you Pascal Leclaire and Filip Kuba, who just resigned a shut-down defenseman with a league worst -35, who signed Redden instead of Chara, traded Danny Heatley for a bag of pucks and has traded more 2nd round draft picks for ineffective rentals than I can even count, IS HERE TO STAY.

Be honest, a few of you Sens fans are unhappy about this. I know it.

Of course, Craig Anderson deal looks good and Murray has wrangled a few college players as UFA signings lately, taking a page out of his buddy Burkie's book. And he does have a top 5 pick coming, so maybe it't not all bad.

Personally, I like Bryan Murray as a person. He seems like a decent human being. His GM skills however have not been great lately. Proof is in the pudding.
Posted by The Muppet at 1:02 p.m.