So here's how things look this morning at the bottom end of the standings.    Last year's 2 & 3 spot teams remain under the heap whilst the 1 and 2 positions from a short while ago have plumetted like a former Leaf Captain's credibility in 08/09.  Meanwhile, only one team from the bottom 6 has seen improvement rising like a phoenix (no... it's not the Coyotes), beating teams it should  beat, and recovers fairly substantively from the sketchiest start since 06/07. 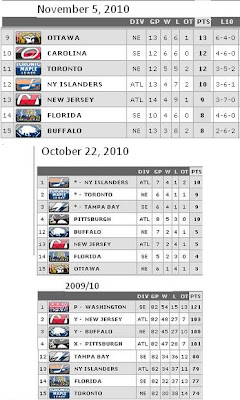 Beastly Spezza with a role in every goal scored by Ottawa; could he perhaps be just geting warmed up?

Also, for those who watched the nationally televised game on TSN, you may recall "Monster" McGuire stating [paraphrased]:   'I don't have a vote for the Hall of Fame, but if I did, I would be casting my vote for [Alfie]'.    Remember:  national broadcast - not a regionally pandering feed.