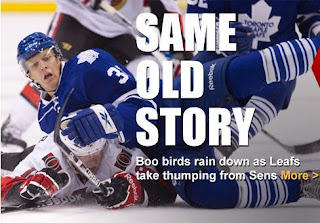 A frustrating season is officially behind Nick Foligno.
The 22-year-old Ottawa Senators winger turned the page on an injury-plagued campaign in style, racing around Maple Leafs captain Dion Phaneuf and scoring a nice goal in Tuesday's pre-season opener

Neiler with 3 pts and Lehner with the shutout. I predicited 4-0 with the boobirds coming out so I too seem to be in good form this early in the season.
For tonight's tilt, I expect it will be closer. 3-0 Sens.
Posted by Don at 10:07 a.m.