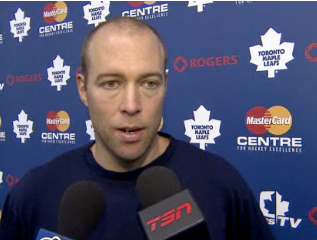 "It's a different team. A lot of young guys, they're all very excited about the season. Everybody is here two weeks before training camp. I've never seen that in my life, ever. It's almost like training camp here right now so it's great to see that. I think if we can keep that mentality and energy all year we can do something good."
-Giggy, September 9th.

I was hoping to see this kind of intensity and commitment from day one of camp, but to have the whole team in Toronto training together this far before camp is good. Very good. As a fan, I think you have to be happy that whatever lies ahead this season, these guys are here to play in 2010/2011.

Also, not that anybody in their right mind would look to me for schedules, but I did say that Toronto plays on Saturday at 2pm to kick of the rookie tourney. That is incorrect according to the website, says on mapleleafs.com that the game is at 7pm vs Chicago. I think this means DiDomenico and Paradis both could be on the ice. Gives the game some added incentive as far as viewing pleasure doesn't it?
Posted by The Muppet at 7:41 p.m.