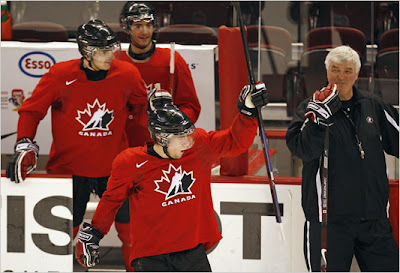 Next to Nazem Kadri, this is the prospect I'm most excited about.

For those who don't remember, DiDomenico busted his femur a year or so ago and despite some folks saying he may never skate again, he was back to finish the last 12 games of the 2009/2010 season and playoffs for Drummondville of the Q.

In those 12 regular season games he had 22 points.
In 14 playoff games he scored 21 points.

He's not a huge guy at 5'11", but he plays with an edge. You may remember him from the gold-medal winning junior team a few years ago when he enraged team USA by skating by their bench yapping after a Canada goal. He's got personality. To go along with his scoring prowess he's excellent on faceoffs, already known for his defensive play and trained with the Leafs staff for the last year at Mastercard centre adding muscle and strength to his frame.

Brian Burke in his outgoing interview was asked about DiDomenico (I think Berger asked him) said that DiDo missed a whole year and is behind in his development. However all his numbers since the injury have been excellent, and at 20 years old he'll be on the Marlies and as far as I'm concerned will be on the Leafs this season at some point to stay.
Posted by The Muppet at 9:37 a.m.