I can't recall any specific predictions I made about how the Sens would place this season, although an early poll response got me thinking they'd squeeze in somewhere between 8th and 10th. While the team has gotten off to a much suckier start than I expected, they've managed to make up some ground on the eve of the All-Star break and are now diminishing the somewhat bittersweet prospects of fetching the number 1 draft pick and commencing a rebuild. Or do they really need a high pick? We are long removed from those late round steals that panned out in the late 90s, but who knows what you might find down the order (see the post below). Hence, more ambivalence. Even the raw numbers can't help convince you the team is thoroughly rotten. The goals for have continued their fall off a cliff, although goals against have dropped slightly from last season (surprising, when you consider what's left of the blueline). Powerplay is perfectly mediocre, penalty kill is one of the few consistent bright spots...in other words "meh".

Tough luck for the Gerb, too. I can't say I'm thrilled that the poor guy couldn't live up to expectations. He's a damn good backup and will surely find stable employment elsewhere (either here or overseas). I'm happy he's finally off the hook (and potentially off the books), but it means at least several seasons before we know for sure what we've got with Elliot.

Speaking of being just on the cusp of giving a crap, here are the BoOB point totals at the All-Star break. Yup, that's me in 14th - too far gone to make a charge, too proud to tank for the McCabe memorial award. 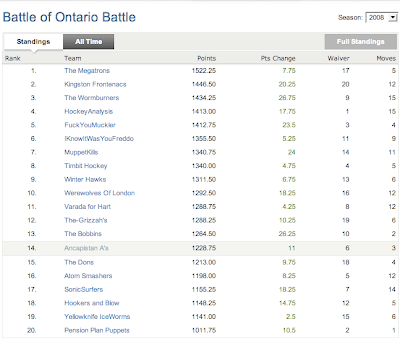 Note your point totals, and see who's due for a rise and fall in the second half.
Posted by Jay Jardine at 11:27 p.m.