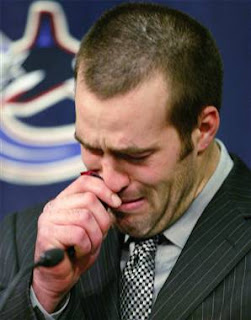 At some point last night while I was playing my 5th straight game of X-Box 360 MLB 2K7, Brian Burke pulled the trigger and brought in Todd Bertuzzi.
Now, call me crazy, but I can't for the life of me figure out why the Stanley Cup Champs need to pay a guy coming off years of turmoil and injury $4Million to play for questionably the strongest team in the NHL?
If Chicago signed him, I could understand. Or Boston signing him - looking for any port in the storm - I could get my head around that too. But Anaheim? Seemed the last place he would go from where I'm standing.

Perhaps the funniest signing of the UFA season happened last night as well. Owen Nolan, one year in Calgary, for around $2M if he reaches incentives? It amazes me that HE is signed and not Jason Alison. The latter, although less than swift, and a defensive liability at best, was still almost worth a point per game and would make 80% of the Powerplays out there better. I mean, hello, Chicago, the only way is up man, get some help.

It's been a colourful few days, but surely this isn't finished. Edmonton surely haven't done enough considering where they parked at the end the season. And apparently Vancouver are happy with an offense that is pressed to score 2 goals in an NHL game.

Then there is of course Ottawa, who don't have room to make many moves but one suspects Murray would want to put some kind of footprint on the team before camp? Maybe it's Billy Guerin? Or will it be Jason Alison? Or maybe, just maybe (fingers crossed), it's Alexei Yashin?

Update: Vancouver has added a trio of players to their roster. Tough to get excited about them if you're a Canuck fan.
Posted by The Muppet at 9:37 a.m.