A Tale of Two Farm Clubs 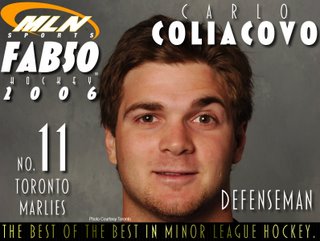 Caught the Marlies and Bulldogs tilt Friday on Sportsnet. It was nice to see a team in blue and white win a game. Feels like forever since I can say that.

Recently healthy defensemen Carlo Colaiacovo and Staffan Kronwall were in the line-up. They played great, especially Carlo who was easily the best player on the ice. He's just started his conditioning stint, but it won't be long before we see him with the parent club. He is the real deal, if he can stay healthy.

Oh, and it looks like a failed playoff record is not the only result from Ottawa's many 100 point seasons. It really hurt their drafting too. Binghampton, Ottawa's AHL affiliate, are currently dead last in their division and share the lead for most Goals Against in the AHL with Phoenix's farm club San Antonio.
Posted by The Muppet at 4:38 p.m.