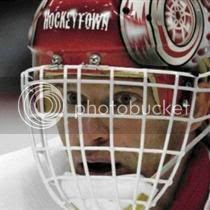 The sens will be paying a visit to Joe Louis Arena to take on the Detroit Red Wings and their old pal, Poppy McGroin. Don Brennan writes about the Dominator's return to form after his latest groin injury, his return to his best shape, and that the sens could have had Vesa Toskala in a trade instead of signing The Gerber Baby. And he finishes the wonderful article by noting that Dom has a history of owning the sens:

It'll be tough to forget all of that as the sens losing streak gains momentum and stretches to four games.
In other news, Bryan Murray does NOT believe that there is a conspiracy against the senators:

I would hope not.

I thought only Toronto coaches whined enough about penalties to get second rate journalists to suggest a conspiracy. Welcome to the big time Ottawa!
Oh and the Leafs try to halt their streak at 7 with a game against the Lightning. J-S Aubin gets the start against a team that the Leafs beat 4-2 once upon a time when they were winning games for fun. Time to see more of that because the sens nascent losing streak is not as much fun if the Leafs are setting the pace.
Posted by PPP at 9:51 a.m.