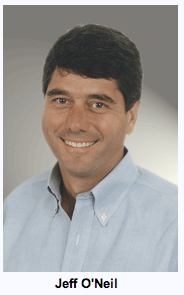 Jeff O'Neil. It's not as common a name as, say, Mohammad. But google the name and you'll find a few of them out there.
Take this guy on the left... He's the CEO of an American wine making company who distributed 1.5 million bottles of vino last year. Impressive.

Of course, there's also the Jeff O'Neil who plays for the Leafs. He scored a huge late goal tonight to help the buds snap a losing streak and creep a few points up the standings. What's strange though, is that this Jeff O'Neil makes 1.5 Million dollars a year.
Coincidence? Is there something about the name and 1.5 Million?