He Who Laughs Last...

After a long day of letting Leafs fans know how bad their team is Gee, Duff, and THM sat down to watch their team dismantle the Washington Capitals and use their game in hand to soar past the boys from T.O. If those Leafs could put 7 by Kolzig then they would manage at least a half dozen! Well something happened on the way to the rink... 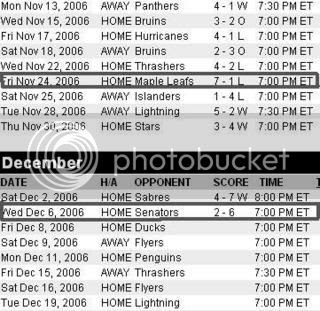 Ray Emery did his best Gerber Baby impression and allowed 6 goals (including a softie or two) on 37 shots for a .838 SV% and the sens were unable to match the Leafs' performance of just 12 days ago. Just as the crew started to think that the old sens were back they laid an egg.
Up next for the Leafs is another trip to Beantown to face the Trappin' Bruins. I promise never to make fun of Tim Thomas if he stops playing like Tiny Thompson.
After the Leafs stop their slide behind a Raycroft 30 save performance and Alex Steen's first goal since forever they will move back above the sens. Of course, the sens will have a game in hand...

Update: As paul noted, J-S Aubin will be getting the start tonight. The Leafs have back-to-backs the next three weekends so tonight's game is a good time to get him some action after three weeks off. Of course this will do nothing to stem the tide of the Toronto Mediots trying to pin the losing streak on Raycroft. Steen is still in the lineup and will still score.

Moreover, Ottawa must be destroyed.