With the trade of Thomas Kaberle this week it's official: Brian Burke has torn down the Toronto Maple Leafs. It took him a few years, but as of today Kulemin is the team leader with 210 games in a Leaf uniform. If a 24 year old being the longest serving player isn't an indication that you've turned over a roster, I don't know what is.

In 2009 on CBC's The Hour, Strombo said to Burke that to make the team better he couldn't just go and trade everybody on the roster. Burke's response was as you will recall: "Watch me".

Below is everybody who touched a puck in a Leafs uniform the season Burke arrived. Only Schenn, Kulemin and Grabovski are here this afternoon. So in the end Burke hasn't "traded everybody", but damn near close. As an aside, if you were going to keep three players from the list below I think 100% agreement that he chose the right ones. 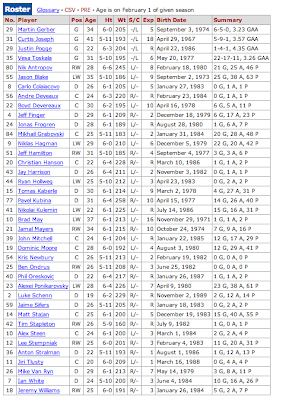 In scientific terms, there is no agreed upon altitude where the earths atmosphere ends and space begins and I reckon the rebuild of the Maple Leafs, the timeline at least, will have the same varying estimates. However Nasa kind of drew a line by saying that if you travel 62 miles skyward you are officially an astronaut. So I figure after 5 or 6 years here at BoO why not throw down the same kind of gauntlet.

Wait, still need more evidence that a page has been turned? Do the same acid test to the Toronto Marlies roster. You'll find similar results. It's a whole new team down there with an entirely different attitude. Add that they are actually winning, a good sign that the big club has reinforcements coming soon if any of the current personel fail. That includes Dallas Eakins who I think all Leaf fans could easily see coaching this team or another NHL team at some point in the near future.

I remember writing a few years back about the rebuild process ahead for Burke and saying that while difficult, tearing down the team is actually the easy part. Clearly it wasn't so easy that it took a few years, but the real work now begins. Turn an inconsistent and young team into a powerhouse playoff guarantee year in and year out. He has performed major surgery on this team, in his own words, but now the physiotherapy begins. How do you turn this group into a damn good hockey team. Then, even further ahead, phase three, how do you put them over the top to win a cup?

As a Leaf fan I can say that without a doubt I am glad Burke is the guy. I know rival fans dislike him. I know he's an opinionated man, a condescending man at times... but as a Leaf fan you can't help but trust him. Like him or not, he did a hell of a job turning this disaster of a franchise into what it is today: Full of youth, full of budding talent and full of hope.

See you at the next flag pole.