Hello, I'm GM of the Leafs and the season starts tomorrow. 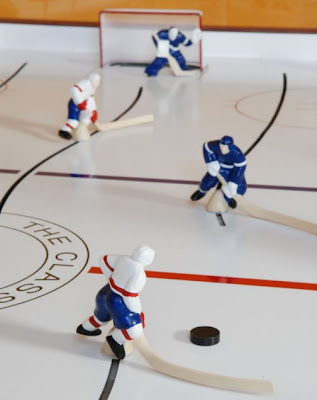 Here is my line-up based on how players have performed in camp:

On offence, Ponikorovsky goes because he's never played with heart and now we have players who do. See ya. I LOVE Rosehill's game and the second somebody gets injured he gets regular minutes. As of right now he dresses for games in Philly and Boston (but he will sit against the Sens when we don't need toughness).

On defence, I haven't seen MVR play so White gets the nod. Sorry Mike, but you're injured already and it's training camp for crying out loud. Frogren, all the best buddy. I choose Exelby over White because while I like the way the latter moves the puck, for my 17-minute-a-game defensive pairing I want the other team worry about getting hit. Hard.

In goal, I have high hopes for the Monster just like you (leaf fans), but in reality MacDonald has actually played in the NHL and he's played in camp and I'll take the bird in hand. If in two weeks one of Tosk or Joey struggles, The Monster is right in there.

KADRI: You are ready to shoot and score in the NHL but you are not quite ready to protect your own end of the ice or use your body. Go and dominate in junior for a year and we'll catch you next year.

KESSEL: When you're completely 100% and have practiced with full contact for at least a week, we'll slot you in. One of Kulemin or Stempniak are the first to go.
Posted by The Muppet at 9:54 a.m.