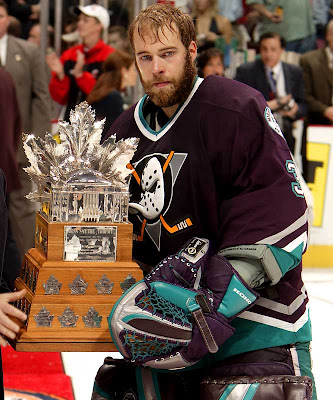 I'm not saying Gustavsson isn't good enough to win the game. It's not about that. It's about Giguere. The pure adrenaline of being on a new team. The opportunity to put Anaheim behind him. The chance to get him gelled with his new team.
The biggest reason however has to be Giguere's ability to stand tall in must-win games. Well, welcome to Toronto buddy. All games are must-win at this point, even if just recouping some dignity is all that stands to be gained in the end.

Throw him in there Ron. What have you got to lose? You know, besides yet another hockey game?

UPDATE: In case you're wondering, Stajan skated on a line with Iginla, Hagman with Jokinen and Ian White took Dion's place and #3, skating with Regehr. Seems like everybody in Calgary is pretty excited about the players they got. Game is on Sportsnet West tonight. If I'm right, that's usually blacked out here in Ontario. Anybody know?
Posted by The Muppet at 1:17 p.m.