Sizing up the Sens

I considered it my duty to try and make a positive passing comment about the Luke Richardson signing (we are truly in the dog days of summer here, kids), while tying in observations about year-to-year dimensional changes in the Senators roster.

If the Sens looked small in their final round loss to the Ducks, it's more likely due to the way they used their available size rather than being objectively deficient in it (see Spezza, Jason and Heatley, Dany).

Looking at the height and weight stats for the top 19 roster spots in the final, Anaheim (the league's new touchstone franchise) averaged a foot taller and a pound heavier overall than the Sens. If you put Eaves in the lineup and Schubert on D (Schubie's a brick shithouse), our forwards were three pounds lighter and two inches shorter on average, with our D being four pounds heavier. 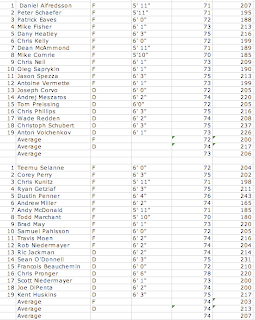 Putting Schubert back up front, our forwards averaged a pound more and a inch shorter than Anaheim's, although the D and overall weight numbers were matched.

Trades and free agent losses to date have had net individual additions of two feet and fourteen pounds in the Schaefer-Donovan deal, while Preissing for Nycholat drops a foot and eight pounds on the blue line. Eaves will see more time in place of the smurfy Mike Comrie (who hit bigger than his size would imply).

So there you have it. In the event of injuries or another grinding series late in the playoffs, at 6-4 215, Richardson bumps that blueline up to an average of 6-2 218.

In much the same way that a, er, boat anchor adds weight and stability.
Posted by Jay Jardine at 12:25 a.m.