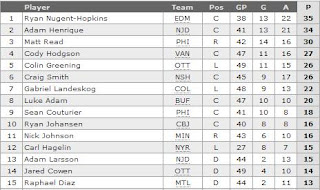 With Greening's two goals yesterday, he moves to a tie for 5th in rookie scoring. Cowen is 1pt behind Larsson for rookie D. Note that Cowen and Greening are 1st and 4th in Hits for rookies too - just another part of the reason the Sens are doing better than expected. Nobody pencilled in that kind of production from these two players.
Leaf fans, you can see Gardiner and Frattin lower down on the page on the NHL site - just ahead of Daugavins.

In another thread, Muppet commented that Kadri has a higher PPG than Turris.  Over several seasons Turris is running at 0.385 (.39).  Kadri is at 0.4.

What about this season, though, the only one that presently counts?  Let's have a look at a category-by-category breakdown (Phoenix numbers removed for Turris): 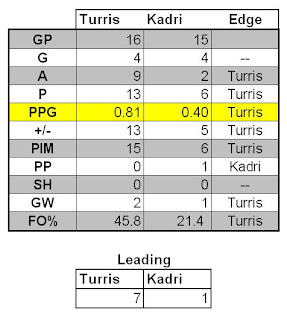