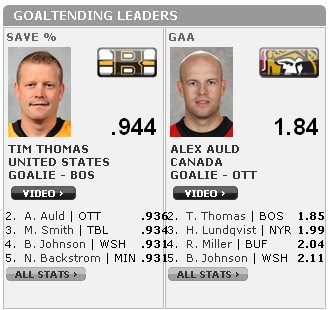 Let's safely assume, though that tonight's victory over the habs will depend less on goaltending and more on some Heatley-Spezza firepower, particularly on the power play. As both have have racked up over 30 points against Montreal in their last three seasons as a couple, a public ass-paddling from the coach couldn't have come at a better time.

Following up on Saturday's observations, is anyone else shifting (Sens fans or not) their hatred from Toronto to Montreal this year? Is it the "entitlement" vibe emanating from the Bell centre? The disappearance of old favourites like Sundin, Tucker, McCabe? No more Neale and Bob homerism from the Hockey Night booth? Was a town near you overrun with noisy, red-white-and-blue clad pests during last year's finals?

Let tonight stand as a reminder to the potential Eastern Conference champs - we may be waiting for you in that eighth seed. The Bruins gave you a good scare last year, and surely you wouldn't want a longstanding foe ruining the storybook season?

Sens 4, Habs 1 (Heatley 2, Spezza 2), Youpie covers his eyes and shakes his furry head before cuing up the Habs Riot Song.
Posted by Jay Jardine at 5:11 p.m.