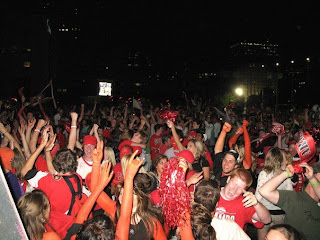 [above: one of many memorable pics from the Elgin Street - The Sens Mile facebook album.]

A tribute prepared on my first Saturday night in ages without a hockey game to look forward to...

The Day After, I heard on the radio how a huge crowd was building up at the airport to welcome the Senators back to town. It's only been three years since I left, but I honestly find that kind of enthusiasm quite pleasantly surprising. I've been following the front pages and news reports as closely as possible throughout the series and it really is something special.

While I attended university there, the knock on Ottawa was always how it was a second rate bummint town that couldn't throw a piss-up in a brewery, how every professional sports operation to set up shop was destined for failure and how there was always a bit too much self consciousness displayed by the locals when it came to celebrating anything of importance. I think this was more often than not a creation of transplanted Torontonians.

It was noted at one point how the children growing up at the time the franchise was reinstated made up the bulk of those 19 to 25 year olds now partying it up on Elgin. Free from the pernicious influence of the Blue Oyster Cult, they and their even younger siblings will leave no doubts about having grown up in Hockey Country. Donning a leaf jersey will be regarded as a peculiar, but almost adorably backward indulgence for the old and graying. For a young bunch, they never sunk to the level of property destroying louts in other cities. When making the playoffs was a big deal, we used to joke about the flaming mayhem that might ensure if the Sens ever brought home the cup. By all accounts, the facebook generation kept things wound up, but professional.

Sure I'm angry about the way the Sens had the piss taken out of them in the final round. I wanted more, but I have to admit that was one helluva run. I could feel the spirit from 3,000 miles away.

As Colby Cosh bore witness to the Edmonton run in '06:

Of all our communitarian fictions--nations, tribes, geopolitical blocs, even families--cities may be the truest and most deserving of our suspended disbelief.

Many thanks to all who contributed, commented or visited throughout the season. I enjoyed the back and forth banter as always, and appreciated the perspectives of our rival blogs from Pittsburgh, NJ, Buffalo and Anaheim. Congrats to the Ducks on becoming the undisputed champions of hockey for 2006 / 2007.
Posted by Jay Jardine at 5:33 p.m.