Gaze upon his sculpted manflesh and try to tell me this dude doesn't look primed for a career year: 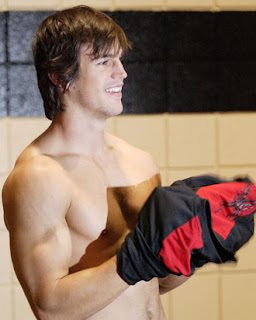 While still looking to secure his top six billing, signs are pointing to big year for number 20. It's his fourth full season in the big league, some slots have opened up with the departure of Schaefer and Comrie and the new head coach is looking to pick up where Bryan Murray left off: finding that elusive second line combination that can build some redundancy into the scoring department. Vermette has had a reputation for stretching out his shifts in the past, perhaps crying out for a bigger offensive role to supplement his penalty killing niche. He'll get all the minutes he can handle this year, and will be a useful swing man to fill in for the inevitable Fisher and Spezza injuries. Prior to getting himself jacked up over the summer, Vermette put the punctuation mark on what was otherwise a fairly feeble flail at the Ducks. CFP is still nursing the separated shoulder dished out to him in Game 5.

Seeing as it's also a contract year, look for a few more of these, a little of this and some more of that in your forthcoming highlight reels.

Prediction: 30 goals, 45 assists playing on a line with Alfie and Fisher/Kelly. Trust me, I'm as comfortable with those projections as I am in my own masculinity.
Posted by Jay Jardine at 12:16 a.m.